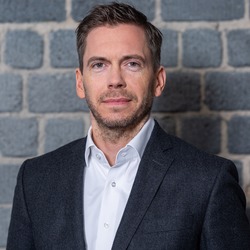 "The real voyage of discovery is not to explore new landscapes, but to see the old with new eyes"- Marcel Proust. Timm Sassen is the real estate developer who transfers this change of perspective to the planning and development of buildings. The founder and CEO of the Essen-based GREYFIELD GROUP is calling for an end to the throwaway mentality in construction and instead for a new awareness that focuses on existing buildings and their opportunities for the environment, building culture and social cohesion. Sassen counters the pure pursuit of profit in his industry, which is sometimes justifiably maligned, with people as the benchmark for his own project developments. In view of the rapid climate changes, the recognized real estate economist also opposes a sustainability discourse that awards prizes to new buildings certified according to various ecological standards, but systematically ignores the resources consumed in the construction of these new buildings. With his own research projects, also financed by the GREYFIELD Foundation, Sassen is making an important contribution to more sustainable urban and real estate development in Germany. Timm Sassen is an architect, engineer, Member of RICS, lecturer at numerous universities and author of the "Leitfaden Redevelopment".

Timm Sassen and many more register for the Construction Summit now!