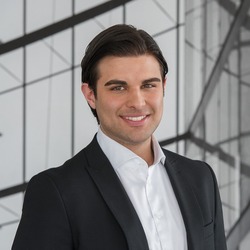 Daniel Torakai is Managing Director at Werner Sobek Frankfurt GmbH & Co. KG He is a structural engineer. He studied civil engineering at the Technical Uni-versity of Kaiserslautern and wrote his diploma thesis about self-powered skyscrapers at the Department of Architecture at the Illinois Institute of Technology in Chicago. Since 2011 Daniel is part of the Werner Sobek Team, first in Stuttgart, Moscow, London and later in Frankfurt. He became a Managing Director at the Frankfurt office in 2021. Over the past decade, Daniel has worked on several national and international large-scale projects such as the new main station Stuttgart 21, Kuwait International Airport or the new highrise ensemble FOUR in the city centre of Frankfurt. Daniel is teaching Textile Architecture at the Institute for Leightweight Structures and Conceptual Design at the University of Stuttgart (ILEK) and Sketching for Engineers at the HFT Stuttgart. He is also a lecturer for Highrise Concrete Buildings at the University of Frankfurt.

Dipl.-Ing. Daniel Torakai and many more register for the Construction Summit now!