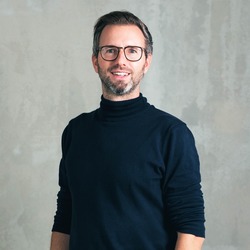 Directly after his architecture studies in Münster, Matthias started his own business in 2010. Even then, he wanted to combine digitization and architecture and asked for a concept that is still used today: A light simulation that calculates physically correct how much daylight falls into a building. This makes it possible to predict exactly where energy can be saved. Since 2017, Matthias has been responsible for project development as a partner at the architecture firm Maas & Partner - and excels with a keen sense of digital process optimization. During his sabbatical year, he spent several months supporting the construction of a cultural center in a coastal town in Ecuador. The time off from everyday life gave him SYTE. also gave him the opportunity to develop new ideas. When, at the end of the David Nellessen in Sri Lanka at the end of the sabbatical year, his concept of a software for analyzing potential was already so mature that it was time for phase two - the expert Phase two - the expert check on technological feasibility. "I have a very personal interest in our SYTE product, because it makes makes my work easier. Architecture is something very real, but it has to be be planned virtually. That's why I've always been interested in concern to link digital with architecture."

Matthias Zühlke and many more register for the Construction Summit now!